The slowdown in the global automobile market has had a material impact on world economic growth over the past nine months and has been a key driver of the global manufacturing downturn, Fitch Ratings says.

While global auto demand should stabilise this year, helped by China’s policy cycle, we expect no rapid rebound and the weakness will continue to weigh on global manufacturing.

The car market, which plays a particularly important role in the current world economic cycle, is the focus of a new special report from Fitch Ratings’ economics team. World car production has been a good lead indicator of the global industrial production cycle and there is clear evidence that multiplier impacts on other sectors of industry are powerful.

Moreover, the relative exposure of economies to the auto industry can help explain the recent pattern of negative GDP surprises, notably in Germany. 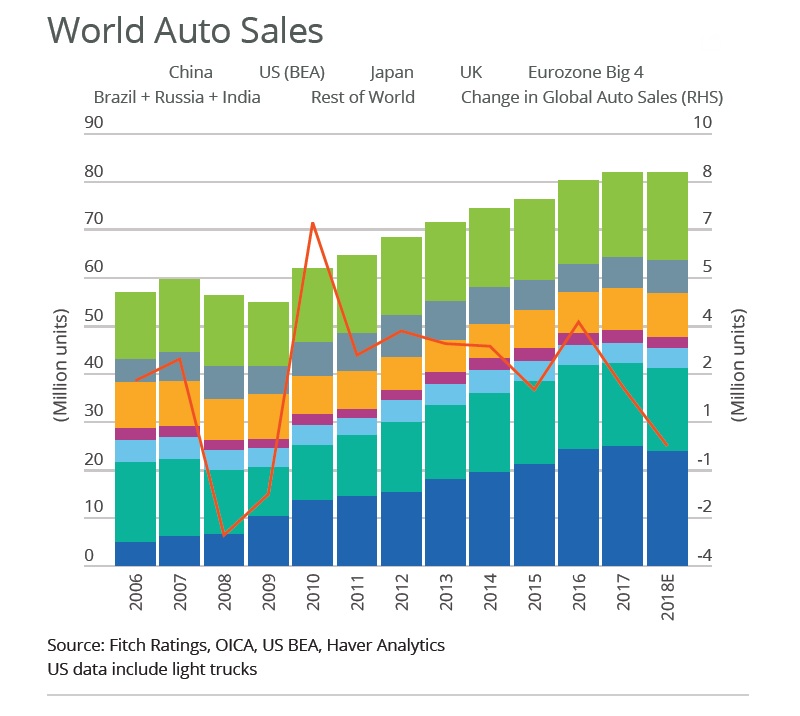 Demand shocks in the auto sector have particularly strong impacts on the rest of the economy because of upstream supply chain linkages as auto makers shift their demand for steel, glass, rubber, components and so on. Eurostat publishes ‘output multipliers’ for different sectors of the EU economy, showing the estimated impact on overall economic output of a unit increase in each sector’s final demand.

The multiplier for the auto sector is 2.4x, significantly higher than for most other sectors of the EU economy. US national accounts data also show that auto production involves an unusually high reliance on intermediate inputs purchased from other industries.

These supply chain multipliers will have increased the impact of the auto demand slowdown on the wider economy. The 4pp decline in global car sales growth in 2018 (relative to the 2011-2017 average) is likely to have reduced world GDP by around 0.2%.

The global auto market should see a broad stabilisation in 2019. The impact of vehicle tax increases in China in 2018 will fade and some modest support measures are expected later this year. Weakness in EU sales in late 2018 partly reflected the temporary impact of new fuel-emission standards. The modest upturn in the credit cycle in China and a more accommodative global monetary policy outlook will also help demand at the margin.

But a strong rebound seems unlikely. Inventories have increased and structural factors – including increased environmental concerns about diesel cars, the growth of the used car market in China, and the rising popularity of new modes of auto travel – are likely to weigh on demand growth over the medium term. We expect global car sales to grow by little more than 0.5% in 2019.

Global sales growth should rise to around 2% in 2020 but growth is unlikely to return to 4%, even over the medium term.

The resumption of moderate growth in global auto sales in 2019 is consistent with our view that downward pressures on global GDP growth will abate this year, leaving 2020 global GDP growth the same as in 2019, at 2.8%. However, the threat of new tariffs hitting the auto sector is a material downside risk and one that would have a sizeable impact on the world economy.