Earlier this year, the European Union (EU) outlined its plan to tackle the ecological crisis and the economic crises together by pledging to put a Green Deal at the centre of a €750bn post-pandemic economic recovery plan. However, without a more solid commitment to ending the funding of new fossil fuel projects, banking reform may be necessary if climate disaster is to be averted.

During her first State of the Union address in September, EC president, Ursula von der Leyen, unveiled plans to increase the EU’s 2030 target for emissions reduction from 40% to 55%, to put the EU on track for climate neutrality by 2050.

But, even if EU legislation is successfully introduced to meet these obligations by the end of summer 2021, there are reasons to be sceptical about the EU’s ability to deliver on its green agenda.

Clearly, for this plan to succeed, the banks will need to come on board in a big way. 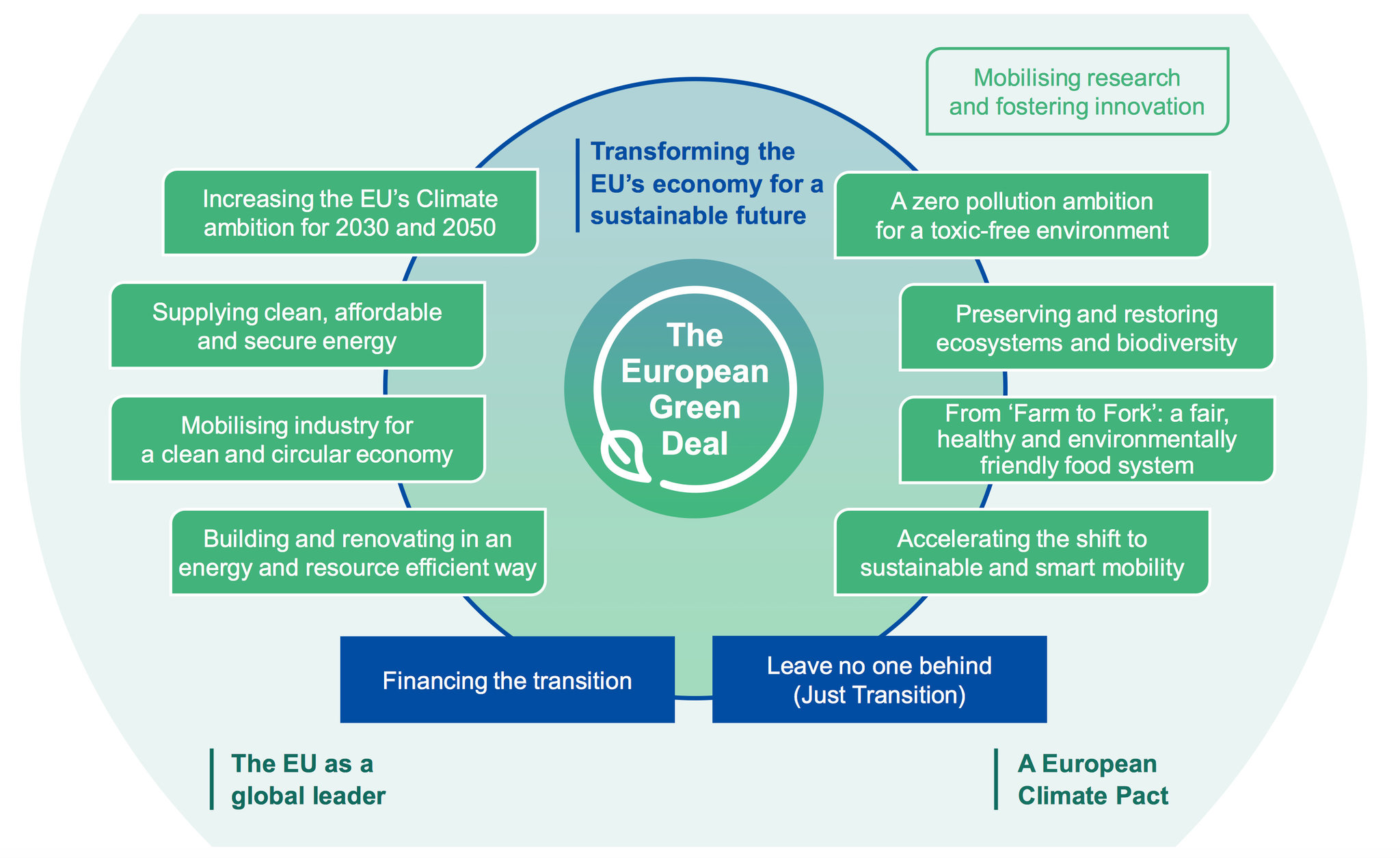 According to the European Banking Federation, the trade association that represents 32 national banking associations in the EU and EFTA countries, banks are crucial to ensuring the success of a Green Deal as they will, “play an essential and pivotal role in financing the change to a sustainable economy.”

What is a major concern though is that Europe’s major banks appear to be continuing to invest very large sums in the fossil fuel industry, even after signing the 2015 Paris Climate accord.

Research by BankTrack and the Rainforest Action Network, two NGOs that monitor private sector banks, reported in March 2020 that 35 of the world’s largest banks have together funnelled US$2.7 trillion into fossil fuels in the four years since the Paris Agreement was adopted (2016 to 2019).

Of the European banks cited in its Banking on Climate Change report, Barclays was the largest supporter of fossil fuels followed by HSBC, during these four years.

More recently, ShareAction, a London-based charity that promotes responsible investment, ranked Europe’s top 20 listed banks on their responses to climate change. Its latest report, Banking on a Low-Carbon Future II, published in April 2020, is based on information from December 2019.

To arrive at its ranking, ShareAction applied the Task Force on Climate-Related Financial Disclosures (TFCD) recommendations for banks. 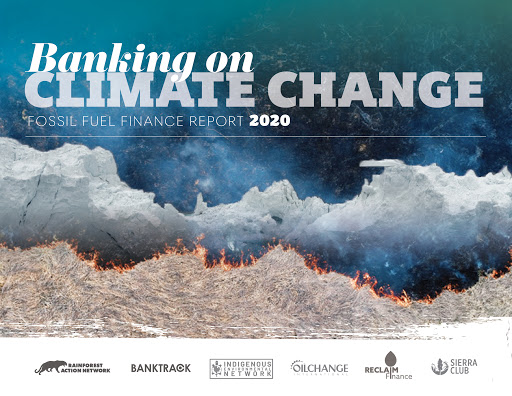 The TFCD was established by the G-20 Financial Stability Board in 2015 to encourage the disclosure of consistent climate-related financial information.

ShareAction scored banks on how they responded to a questionnaire covering four themes:

In issuing its report card for the sector, ShareAction said European banks are “not yet doing enough to tackle the climate crisis,” with a group average of just 39.9%.

“Not a single bank currently represents best practice in managing climate-related risks and opportunities across all assessed areas,” the author of the report said.

Generally speaking, “the banks’ policies in relation to high-carbon sectors are currently still insufficient to ensure alignment with the goals of the Paris Agreement, and often they are just tinkering around the edges.

“There is a real risk that banks’ continued financing of fossil fuels will overshadow any positive impacts they might achieve through financing low-carbon solutions.

BNP Paribas, among Europe’s top bank asset finance earners, scored the highest thanks to its consultation with stakeholders about their priorities and its decision to exclude non-conventional oil and gas financing of tar sands and arctic drilling.

Other significant European bank lessors, by turnover, include: Lloyds Banking Group, ING, HSBC, Credit Agricole, Societe Generale, Santander and ABN AMRO, all of which find themselves in ShareAction’s top 10.

Lloyds, which came last of 20 in ShareAction’s 2017 survey, was ranked second this year, demonstrating that “it is possible to improve climate-related performance very quickly,” the report says.

Lloyds is “the first surveyed bank to have set an ambitious numeric target to reduce the carbon intensity of its lending activities,” the report adds. 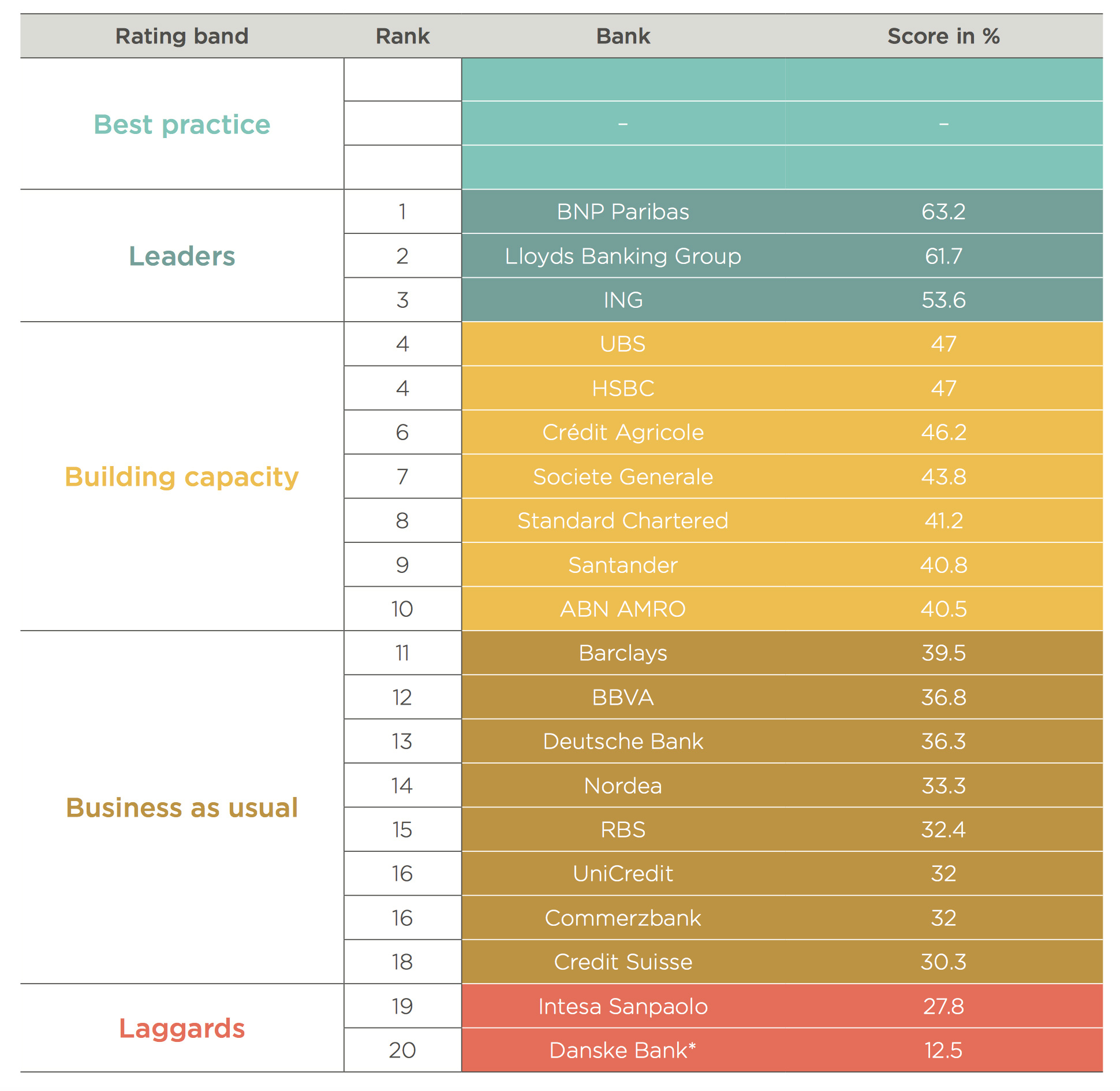 But not all ESG experts see the group in the same light.

In a statement, the bank said: “Intesa Sanpaolo ranks at the top of the main sustainability indices such as the MSCI ESG Score, the Bloomberg ESG Disclosure Score and the CDP Climate Change Score.

“Intesa is also the only Italian bank listed in the Dow Jones Sustainability Indexes, the CDP Climate A-List 2019 and the 2020 Corporate Knights Global 100 Most Sustainable Corporations in the World Index.

Intesa Sanpaolo made its first international investment in the circular economy with a £175m (€200m) finance agreement with Thames Water in 2019.

“Thames Water will be incentivised to meet targets based around adopting circular economy principles which, if met, can unlock improved finance terms,” according to an August 2020 report entitled Green Asset Finance: A New Business Landscape by the Helsinki-based IT company TietoEVRY. A second international deal followed this year to finance Germany’s GreenCycle.

In 2019, Intesa Sanpaolo’s disbursements for the green and circular economy totalled around €2.2bn, equal to 3.7% of total loans. This brought Intesa’s 10-year total to about €20bn.

But according to the bank’s consolidated non-financial statement, as at 30 June 2020, loans disbursed for the green and circular economy in the first half of 2020 were “approximately €780m disbursed, equal to 1.9% of total loans.” The bank says that green disbursements this year were negatively affected by the Covid-19 pandemic.

Clearly, without improvements by European banks in climate-related risk assessment, innovation in low-carbon products and services, better public policy engagement and a commitment to a green strategy and its implementation, the success of the EU’s vast decarbonisation programme cannot be guaranteed. If the 2050 targets are met, observers say Europe will become the first climate-neutral bloc in the world and will be positioned as the global frontrunner in tackling climate change, thereby allowing asset finance and leasing to help make this a reality. But, if boardrooms continue to be too slow to respond to change in the face of overwhelming evidence of a heating planet, legislatures will be left with few options but to enact popular bank reform agendas.
Share this article