VLCC rates peaked approximately 450% higher, compared to March 2019, for routes between the Middle East Gulf and the US Gulf.

Tanker rates initially declined in February 2020 amid subdued demand for crude oil and petroleum products following the outbreak of Covid-19. 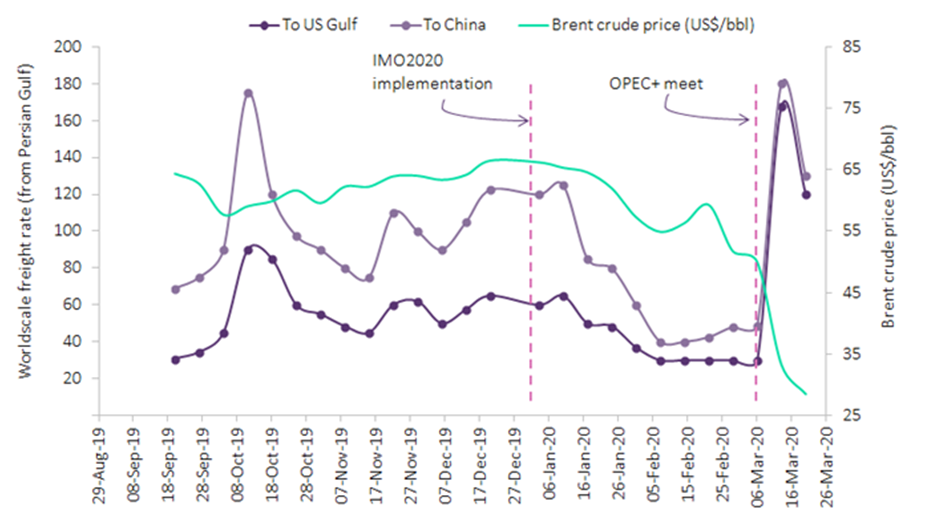 However, after Saudi Arabia and Russia fell out over crude production cuts (which led to an oil price crash), tanker rates began to rise from 6 March as oil producers and traders started asking VLCCs to hold crude oil temporarily in expectation of an oil price recovery.

In the second week of March 2020, there was a distinct spike in rates for VLCCs originating in the Middle East bound for the US Gulf and China routes.

The practice of leasing VLCCs for hoarding crude oil during downturns is common.

It allows producers and traders to recover their production or procurement costs, and sometimes, even profit from the trade if the price recovery is within a short time span.

However, the present scenario is unprecedented because, on one hand, crude oil demand has dropped drastically worldwide as industries and transportation have come to a near standstill.

On the other hand, Saudi Arabia is preparing to raise its output and push more crude oil cargoes to global refineries.

Hence, the present downturn may last for a longer duration or until Saudi Arabia and Russia agree on production cuts.

Hence, it would be very challenging for oil producers and traders to estimate suitable freight rates and the holding period to break even.

Wealth in the US: HNW Investors

View All
View All
Uncategorized

The “Great Reclassification” of sustainable funds

How central banks could help close the green investment gap