Equipment leasing volumes for August across Europe have revealed the impact of a relatively subdued holiday season on lease inceptions, according to Acquis Insurance Management an insurance administrator active in the asset finance sector.

Following two consecutive months of growth, August saw volumes drop for the first time since the recovery began in June, according to the Acquis Index.

However, there is undoubtedly some seasonality impacting the figures, supported by the fact we saw a similar scale July-to-August-drop during 2019.

The easing of lockdown restrictions that we witnessed across continental Europe during July and August meant that many offices and manufacturers slowed down during August as workers took their annual leave. 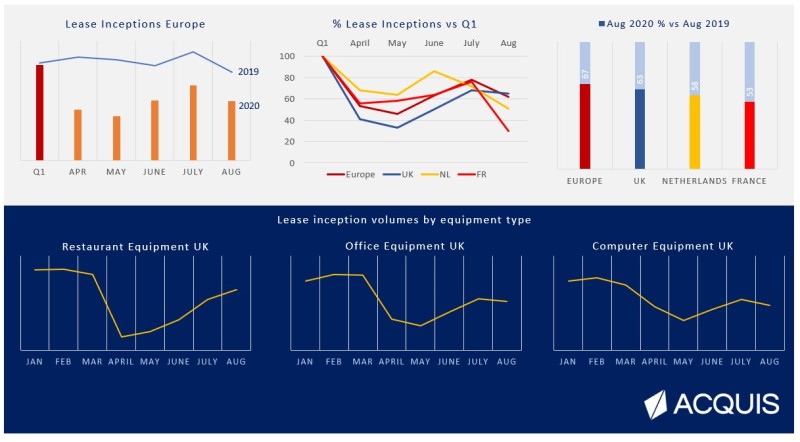 A strong contrast was evident in the UK, where the drop in lease inceptions from July was just 4%, reflecting the nationwide focus on business as usual encouraged by the government’s Eat Out To Help Out scheme and its push for a return to office working during the month.

The incentive was evidenced strongly in the data for the UK restaurant sector where lease inceptions for restaurant equipment were one of the few equipment classes which continued on an upwards trajectory, recovering to 77% of Q1 volumes.

A look at year-on-year data shows there is still a long way to recover to 2019 volumes for most European countries, with lease volumes for France running at 53% of August 2019 figures, and the Netherlands performing at 58% when compared with the same period a year ago.

Acquis’ chief commercial officer, James Rudolf, said: “The drop in August volumes comes as no real surprise as it reflects the seasonal drop we witness every year during the month.

“Overall, there are still positive signs of recovery but the retightening of social restrictions that we are seeing across Europe and the knock-on effect this will have on economic activity means the outlook will continue to look bumpy for some months to come.

“Thanks to the support of our stable insurance partners, Acquis is very well positioned to continue to support our clients and their customers as we head into an unpredictable winter season.”

Acquis Insurance Management is an independent insurance administrator working in partnership with over 90 leasing companies across 13 European countries and has been providing specialist insurance programmes for equipment leasing for over a decade.

Acquis’ volumes are predominantly made up of small-ticket equipment with an average ticket size of €12,000. 58% of the volumes are made up of IT / office equipment, 15% retail and 12% manufacturing, with the remainder consisting of construction, material handling, medical and other assets.

Digital editions are here to cover some of the key trends and developments across the industry.
Read Now

We use them to give you the best experience. If you continue using our website, we'll assume that you are happy to receive all cookies on this website.

How To Accelerate Brilliant Digital Experiences With Low-Code