The shift to remote working over the last year has seen offices around the world abandon desktop PCs to make room for more laptops and mobile devices, the downside of which has been a worsening global e-waste crisis, says Carmen Ene, who runs a technology lifecycle management joint venture with BNP Paribas – but, she adds, leasing may hold the keys to a solution.

The world throws away the equivalent of about 14 Eiffel Towers worth in weight, of electronic waste, every day, says Carmen Ene, the CEO of 3stepIT, a Finnish company that helps businesses manage their IT equipment in a sustainable way and has been joined by BNP Paribas on this project.

3stepIT, a private company, manages 2.2 million electronic devices for more than 3,000 businesses worldwide and is involved in refurbishing IT as well as reselling end-of-life equipment.

Ene has been observing the rise and rise of global e-waste since becoming the CEO of 3stepIT in 2015 and believes the crisis is about to get a lot worse.

“The pandemic has accelerated the e-waste crisis, with businesses across the globe forced to make rapid and unplanned shifts to homeworking for their workforces.

“Covid-19 has also been accompanied by a dramatic uptake in schools and universities moving to e-learning. So, taken together, this is a digital transformation on a scale we’ve never seen before,” warns Ene.

A 3stepIT survey from August last year of IT decision-makers from the UK, France, Germany, Switzerland, Austria, Norway, Sweden, Finland and Denmark, found that 84% of businesses had purchased additional hardware to facilitate homeworking.

In August 2020, Apple became the first publicly traded US company to hit $2 trillion in market value.

Although Apple closed many of its bricks and mortar stores due to the shutdown, its sales of gadgets and devices, as well as streaming services, have gone through the roof.

It took Apple 42 years to reach the $1 trillion milestone, but just two more years to double this, “and what is surprising is that the second trillion came in the 21 weeks when the global economy was shrinking rapidly during the Covid-19 pandemic,” says Ene.

“What this means for e-waste is that while much new technology was bought to manage working from home, there is a lot of technology that’s had to make room for it,” says Ene, citing her company’s research which found that 29% of desktop PCs were retired in offices across Europe during Covid-19 in favour of portable devices such as laptops, tablets and notebooks. 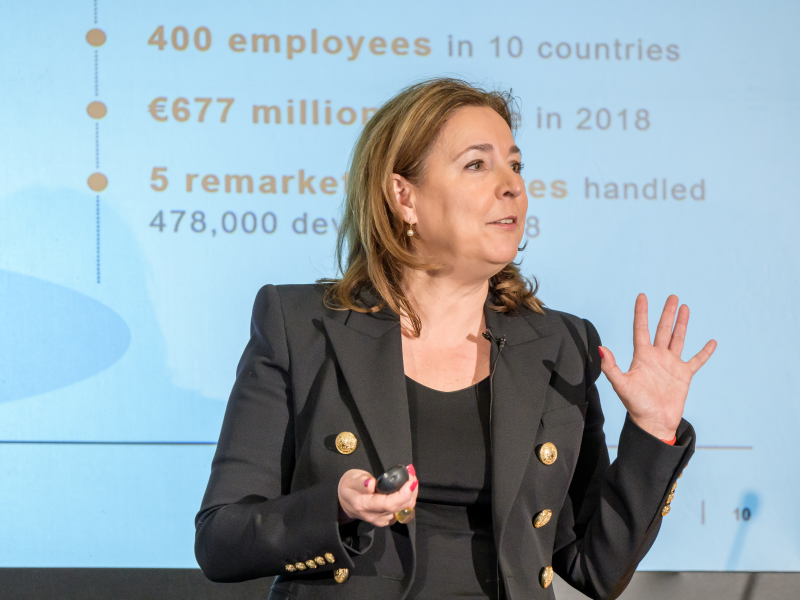 (Pictured: Carmen Ene at the Leasing Life 2019 Conference in Barcelona)

Ene’s journey to IT lifecycle management expert began in her native Romania, growing up under the rule of Communist dictator Nicolae Ceauşescu. As Ene recalls: “Like any other teenager, I dreamed of running away from the regime to get a taste of life in the West.”

However, Ene did stay in Romania to complete her studies. “Education in the sciences under the Communists was strong, but they were not so good at teaching humanities,” she says.

So, it was fortunate that cybernetics – the study of the interaction between living things and machines – had piqued her intellectual curiosity.

“Cybernetics was the equivalent of today’s ‘artificial intelligence’ or ‘machine learning’ you could say, it was the cutting-edge field of its day, if little understood, especially by the Romanian Communist Party,” she recalls.

One of the pioneers of cybernetics was Stefan Odobleja, a Romanian scientist-philosopher who had written one of the seminal works on the subjects.

Although he was celebrated abroad, the Romanian authorities were suspicious of his work and he spent the last years of his life under police surveillance or under house arrest for his academic work which was treated with deep suspicion. He died in 1978. 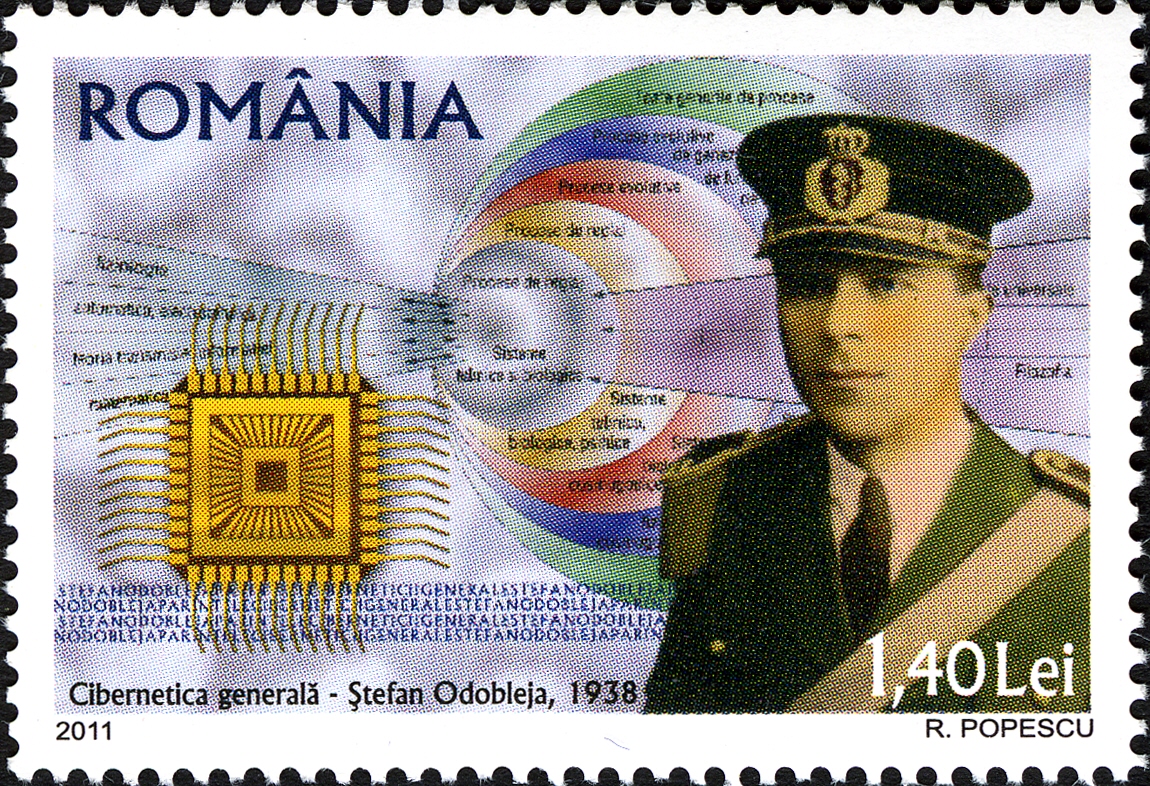 His academic achievements, fortunately, were recognised by his colleagues and were being taught and published at the Faculty of Cybernetics at Bucharest University of Economic Studies, where Ene was enrolled as a masters’ student in the 1980s.

“Cybernetics was supposed to solve many of the world’s problems, in biology and economics and other areas. We wanted to change the world,” Ene says of the faculty feeling at the time.

When Ceauşescu was finally toppled in December 1989, ending 42 years of Communist Party rule, Ene had graduated and was working for the Procurement Ministry of the State writing COBOL computer programs.

“It was interesting work, but it was not my thing. I wanted to get involved in commercial work,” she says.

A chance came along in 1990 when she was approached by a group of colleagues about setting up Romanian Business Systems (RBS), the country’s third private company in the post-Ceauşescu era, which became Ene’s employer for the next five years until it was bought by IBM in 1995.

There followed a 20-year career with IBM, “a tremendous learning experience” which allowed her to carry out various executive functions and work and live in several European cities.

It was at IBM that Ene first encountered solutions to used IT equipment.

“At IBM we would sell used equipment, mainly mainframes, big servers and mid-range computers – that was in the early ’90s – and this was done largely for commercial reasons, as there were various clients who could not afford top-range computers, but who could afford used ones.

“At the time there was no sustainability connotation with ageing equipment,” she recalls.

But the PC, which had been invented in the ’80s, was becoming widespread by the early ’90s, and the Eiffel Towers of e-waste were starting to be a global problem, says Ene.

When 3stepIT came knocking in 2015, Ene was keen to embrace sustainability as her next business challenge. “My mission was to internationalise the business” which, at the time, was focused on the Nordic countries, recalls Ene.

Ene’s latest project is the strategic alliance with BNP Paribas, Europe’s second-largest bank by assets and a specialist lessor for professional equipment.

In 2019, BNP Paribas Leasing Solutions recorded over €30bn in receivables, according to Asset Finance Policy.

Since its launch in October 2019, the joint venture company – in which 3stepIT has 49% ownership and BNP Paribas the remaining 51% – has been expanding its footprint and currently has branches in six European countries: the UK, France, Italy, Germany, Belgium and The Netherlands.

Commercial partnerships exist in several other countries, but the game plan is to expand into new European markets through local branch openings, but no specific markets have been named to open next, says Ene.

“The joint venture enjoys a common goal and ambition, we bring value to the customer, not only commercial value through residual value and total cost of ownership, but value in terms of sustainability.

“BNP has the funding, capabilities in terms of credit and a huge customer base and we have the IT lifecycle expertise and knowledge about residual values and asset renewal and refurbishing, as well as data cleaning and reselling IT equipment,” says Ene.

The global shift towards sustainable IT is being driven by two trends, the climate crisis and the move towards remote working and e-learning, “this, in turn, is driving the growth of our business,” she says.

With the electronic recycling rate in Europe under 40% and re-use rates under 5%, there is huge room for improvement, “and much work is still to be done,” she adds.

Corporate attitudes towards sustainability are changing, “businesses are realising they don’t have to own technology to benefit from the incredible power it can deliver, they just need access to it, and this is leading to a shift toward the circular economy model in IT ownership.

“By prioritising access over ownership, businesses can kick-start a more sustainable approach to IT, from acquisition to in-life management through to the way a device is refreshed, repaired, re-used and recycled,” says Ene.

3stepIT found that 54% of organisations said they are more likely to use finance to acquire assets over the next two years, which could see leasing companies stand to benefit, particularly with pay-per-use, or as-a-service, business models in the ascendency.

“The leasing industry has a tremendous opportunity to play the role of facilitator or enable of the circular economy.

“It is my mission to raise awareness of the scale and severity of the electronic waste crisis and to put into focus the role that businesses can play in turning back the tide,” she says.

In 2019, 53.6 million metric tonnes of e-waste – discarded products with a battery or plug – were created globally, but only 17.4% of this was officially documented as recycled, according to the UN-affiliated Global E-Waste Monitor 2020.

Critics say, these statistics show that existing recycling efforts are not keeping up with the global growth of tech trash.

The report also found that e-waste had grown 21% over the past five years, making e-waste the world’s fastest-growing domestic waste type.

The rate of growth in e-waste is due to high rates of electric and electronic equipment consumption, short IT life cycles, and few options for repair.

In January 2021, France became the first country in the world to require manufacturers of laptops, smartphones and other electronic devices to use a ‘repairability index’ to inform consumers about how repairable their products are.

Recent years have also seen a growth in pay-per-use, or IT-as-a-service, business models, which transforms the offering of a product to customers to providing an ongoing service alongside the product.

Under the IT-as-a-service model, consumers no longer own products but only take them as part of a service offering, thus returning the onus of repair, reuse and recycling back up the supply chain, possibly with added pressure on the manufacturers to design devices in a more modular way with components that can enjoy the benefit of many lives.

This concept is understood as ‘reverse logistics’, or reverse supply chain management, and looks to re-integrate would-be wasted materials back into either its own supply chain, or the supply chains of others in need of e-waste materials.

“The role of e-waste in contributing to the climate crisis does not get the attention it deserves.

“Despite the growing number of sustainable alternatives, there is still plenty of widespread misinformation about how to consume and dispose of technology in a responsible way. Our research found that 30% of IT decision-makers don’t know where their e-waste ends up, and one-in-ten dump their IT devices in landfill.

“I’m not surprised by the size of the e-waste problem, I’m surprised by how little awareness there is about e-waste, says Ene.

Much of the materials and minerals being thrown away with e-waste are not only valuable but can be toxic to living creatures and the environment, these include arsenic, cadmium, lead, mercury and beryllium.

These properties and elements not only need to be kept out of landfill, rivers and lakes but also kept from being dumped into emerging economies in China, India and Africa.