A research report entitled the future of manufacturing in Europe published last year emphasised that by taking the lead in the commercial adoption of emerging technologies, the EU could give itself a competitive advantage over other trading blocs. The UK should also take note if it wants to stay relevant and competitive.

Emerging technologies can transform an industry and the leasing sector has always needed to be at the forefront of any trends that determine the future of business innovation. 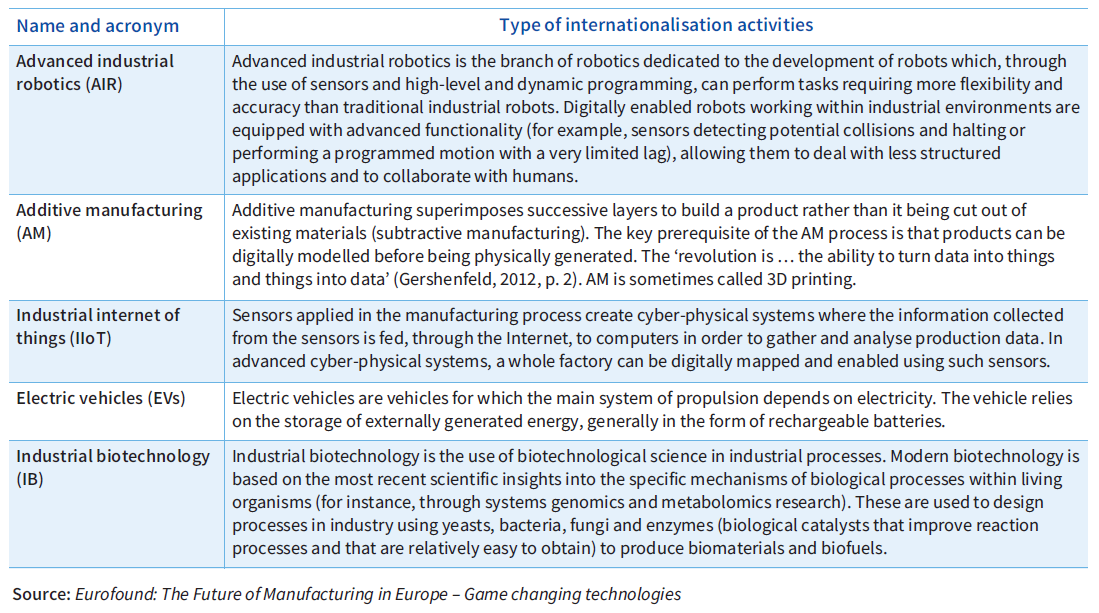 The report appears in the context of emerging digital technologies and international competition, particularly from China.

Commercial players in this space, not least of all from equipment finance providers, is likely being witnessed and experienced with a mixture of trepidation and encouragement. As the report says: “The publicly-funded promotion of European industrial champions inherent in such approaches must, of course, be tempered with due regard for the efficiency and innovation-enhancing benefits of fair and open competition.”

The report considers the potential impact of these five technologies on production processes and the potential for mass customisation. This is where we pick up the report:

Apart from the centrality of data, another important aspect of the technologies is that they open up the possibility of flexible specialisation or even mass customisation. Mass production is generally understood as the opposite of customised production: the latter is expensive, flexible and only suitable for small quantities, while the former is cheap (per unit), rigid and enormously scalable. According to the interviews carried out for this project, the three process technologies could remove this contradiction, thus allowing production that is cheap and flexible as well as highly scalable.

In traditional mass production, the production process is centrally controlled. Production workers tend to be relatively low skilled and have low levels of autonomy, while machines and robots generally serve a single purpose for which they were exclusively designed. Changing the process is very difficult and costly, since it requires a complete rearrangement of the entire system. While this rather simplistic view of the labour process in manufacturing has been evolving for some time, these three process technologies have the potential to radically increase flexible specialisation.

Firstly, in contrast to traditional robots, AIR robots are algorithmically controlled, general-purpose machines that can be easily reprogrammed to carry out different tasks in production. Indeed, with artificial intelligence, such robots would be able to interact and respond autonomously to changes in their environments. This obviously increases the flexibility of the production process. However, this flexibility does not necessarily come at the expense of standardisation. Although they can be easily reprogrammed and redeployed for different customised outputs, AIR robots are still robots that behave according to predefined rules, and thus their output will be standardised and consistent. This is crucial for mass customisation to be economically successful.

Secondly, by interconnecting all objects of the production process under centralised and algorithmic supervision, IIoT systems also increase the flexibility of the process. In the same way that digital robots are inherently more flexible than mechanical ones, cyber-physical production systems are inherently more flexible than traditional ones. Real-time centralised control and interconnectivity not only allow much faster reaction to problems, but also relatively fast reprogramming of production in response to changes in demand or other factors.

Finally, the relevance of AM for flexible specialisation is obvious. AM condenses the entire physical production process into a single step. The digital object can be easily reconfigured, and the different printed objects can have consistent quality, provided the rendering process and materials used are the same. However, it might be unrealistic to believe that the scale of AM production could be termed ‘mass customisation’, and so ‘flexible specialisation’ is a more appropriate term in the case of this technology.

Another important potential effect of the studied game-changing technologies on the production process is the servitisation of manufacturing. Servitisation refers to the increasing importance in the added value of manufacturing companies of services attached to the product. Those services can be anything from maintenance to unrelated additional services.

This is most obvious in the case of IIoT. The connected digital devices embedded in products allow companies to maintain a line of communication with, and even control of, the product after the sale. This facilitates the provision of aftersales services such as predictive maintenance and ‘updates’ that improve or even add functionality to the product, or additional services.

However, the servitisation trend can have a negative effect on the existing constellation of service providers around industrial products such as cars or household appliances. The reason is that servitisation enabled by IIoT makes it easier for producers to internalise maintenance and other services, thus eliminating the business of independent service providers.

A car that is permanently connected to a manufacturer that can remotely and wirelessly control the functioning of its internal algorithms is much less likely to be maintained by a small independent workshop.

The same trend of servitisation can have positive implications for the environment. If products are a platform for long-term services, manufacturers have an incentive to make them more robust and enduring.

In an economy driven by demand for mass-produced goods, it is in the interest of manufacturers to generate disposable goods with a short renewal cycle in order to sustain ever-expanding production. But for a servitised manufacturer, the ideal product is a long-lasting one that can make for sustained profitable service relationships with the client.

The relationship between AIR and servitisation is more tenuous, but still important. First of all, AIR contributes to servitisation by further reducing core manufacturing activities, which necessarily increases the relative importance of services. That is, after all, the main driver of servitisation: the need to generate new profit opportunities for products whose mere manufacture have declining profitability.

Another effect on the production process of the studied game-changing technologies is the increase in resource efficiency. This is also related to the use of digital technologies. Much richer information at every step and in every aspect of the process along with the increased precision of algorithmic control enables more efficient use of materials and energy in production. AIR can reduce errors and increase the precision of production operations. IIoT increases the knowledge available of the condition of products and materials throughout the production process and beyond, facilitating enduring products with more efficient maintenance.

AM can significantly reduce manufacturing waste by using just the right amount of material needed in the additive layer-by-layer product creation. This obviously has significant environmental benefits and in the context of growing environmental concerns and related policies, it was identified by several of those interviewed as a potential driver for the adoption of these technologies in Europe.

Diffusion of the game-changing technologies

Potential scope of the game-changing technologies

Three of the five technologies – AIR, IIoT and AM – are transversal technologies and so, unlike the other two, are not associated with particular products. Due to the generic nature of these technologies, both in isolation and in combination with each other, they have potential application in practically all types of manufacturing.

Moreover, they are of possible relevance to many stages of the manufacturing supply chain. Indeed, in some respects, they can transform the concept of a supply chain as distinct stages of economic activity. This is perhaps most obviously exemplified with AM where, in practice, the production process becomes almost indistinguishable from design and logistics.

AIR and IIoT are different technologies with different purposes, but each requires and produces a large amount of digital information and, ultimately, relies on digital algorithms to process and manage industrial processes.

IIoT and AM can be considered as two sides of the same coin – the digitisation of production processes – since IIoT collects, encodes and processes digital information on the physical process, while AM transforms digital models into physical products.

Together, these three technologies constitute the core elements of a cyber-physical model of the manufacturing process.

The two technologies that are a mix of product and process innovation (EVs and IB) are also strongly linked to the digitalisation of manufacturing and thus have strong synergies with the three process technologies, though in different ways.

The EV is a new technology for the car industry. Well-known companies and industrialists from the ICT sector are among its key supporters and promoters, and it is likely to be a catalyst for the adoption of new technologies in production. Being radically new, the production of EVs requires the setting up of new factories and processes.

This reduces the inertia caused by existing installations and practices and stimulates experimentation with new tools and methods. Some of the brand-new producers of EVs, therefore, provide the best example of several of the effects mentioned above (that is, information centrality, mass customisation, servitisation and increased resource efficiency).

As such, these new entrants force established car manufacturers to innovate more quickly, and they encourage new and established companies to deploy EV charging stations.

The estimated potential market size of the 5 game-changing technologies

These advanced technologies are far from widespread. When advanced ICT is used extensively, it tends to be significantly concentrated in highly productive firms; moreover, penetration rates vary widely among countries. Indeed, one of the possible explanations for the lack of significant productivity gains that can be attributed to these technologies is the very thinly spread take-up throughout the economy.

Business analysis companies have made predictions of the potential market size for the five game-changing technologies. It must be emphasised that there is much uncertainty in such forecasts. The practical application of these technologies does not depend only on technological readiness per se; the technologies also need to lead to innovations that generate profit for companies. AIR and IB, in particular, require substantial initial investment.

Moreover, this requires sufficient cash flow to support the conversion of production processes and the training of workers in charge of monitoring robots. This may not be a speedy process throughout the economy. It takes time for companies to gather relevant information on, and come to an understanding of, how these technologies can generate profit. Investment can also be hindered by the many uncertainties related to radically new technologies: for example, as regards security, industrial standards and intellectual property rights.

Given the transformative potential of digital technologies, in the sense that the whole supply chain is to become digitally connected, significant issues arise around coordination. The systemic approach is best exemplified by Industrie 4.0, a German strategic initiative to promote the country’s lead role in advanced manufacturing solutions. This has broad-based stakeholder and expert involvement and a broad remit with regional structures, and it integrates a number of wider policy fields, such as vocational education and training. There are a number of other overarching initiatives, including Produktion2030 in Sweden and Connected Industry 4.0 in Spain. None of the others have the scope of the German initiative.

There are many policy initiatives aiming to spread information on the potential of digitalisation in companies. Certainly in many companies in Europe, not least in SMEs, there is still much unfulfilled potential in relation to items measured in the Digital Scoreboard – such as having a website, using social media, access to broadband, using ecommerce and using portable devices.

However, policy issues for the game-changers are very different. The fundamental role for policymakers and other influential actors is the establishment of future frameworks that provide some degree of certainty around which companies can orient their investment strategy. There is also a role for significant publicly funded strategic investment, not least in light of the investment strategies of the main global competitors. Large companies, both by themselves and in partnership with others (such as suppliers), also have an important role to play.